Hi guys this is my like first post so sorry if it's in the wrong place but I've got a pair of apisto double reds and my friend has given me his 1 female yesterday can I keep a trio in a 2ft will it be ok or not enough space for every1 ....pics below

Staff member
5 Year Member
I doubt that you'll have a peaceful tank the way it is set up right now. It's just too open with no visual boundaries. A 2'/60 cm tank is almost always too small for 3 apistos.
A

Techicnally this tank was setup for a pair and not a trio I was just wondering weather it would be alright ...when you say visual boundaries what do you mean or what will an apisto see as a boundary line in terms of arranging tank setup

Staff member
5 Year Member
Visual boundaries are just that, visual features the fish use to separate their individual territories. Typically, if they can see each other they will display at these boundaries and not cross them. If they cross, then it isn't a boundary. You need to build areas where less dominant fish can hide and still have their own territory. I always suggest that each female have a territory of 1' / 30cm in diameter. BTW females are much more territorial to other females than males. Males of polygamous species like A. cacatuoides will consider the whole 2' tank as their territory. When a female has eggs/fry the male will he be unwelcome in her brood territory. Once the fry become freeswimming females try to expand their territory as the brood grows. If both females have broods at the same time deadly fights can break out where the male and less aggressive female can be killed if they can't or are unwilling to hide. I did have 3 females successfully breed and raise fry in a 2' tank once. The middle 20" / 50cm of the aquarium was choked with a mass of Java Moss that filled the tank from top to bottom and front to back. It was hard for the fish to ever see each other.

Mike Wise said:
I did have 3 females successfully breed and raise fry in a 2' tank once. The middle 20" / 50cm of the aquarium was choked with a mass of Java Moss that filled the tank from top to bottom and front to back. It was hard for the fish to ever see each other.
Click to expand...

I agree with Mike, if you have multiple females you need to have a lot of cover.

This tank had Apistogramma agassizii and Copella arnoldi that both successfully raised fry (those are some of the Copellas growing out).

It was my "spare wood tank", and was basically full (to the top) of wood, fern and moss with a layer of floating plants, there wasn't any open water at all. 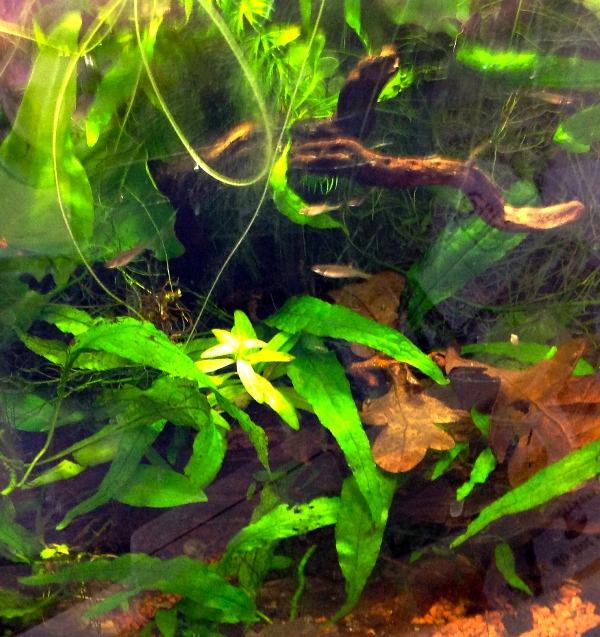