I recently saw that Ruinemans, have a. D29, listed, so out of curiosity, i wanted to hear if any of you have any experience with them?
Are they to be kept as Mac’s, aggression, any pictures to share as it’s quite sparse on the web, etc..

As for their looks: they look exactly like A. sp. Schwarzkehl (the only difference in this regard may be the rate and/or distinctness with which brooding females show a black throat).

The habitats:
We collected the A. sp. "Schwarzkehl" in residual water inside such oases, on the Colombian plains; Llanos:

A. sp. "D29", on the other hand, were collected almost 200 km away, and in a relatively large river.
We found the fish mostly right up to sandy banks, completely without any protection from branches or leaves:


We also found some specimens among leaf litter and under branches in other parts of the river, like here:

and we found a few specimens a few meters from the main river, up in a tiny stream:


I doubt anybody has travelled all the way to the A. sp. "D29"-habitat, to collect a few apistos. So I'll guess the fish in Ruineman's tank are descendants of the specimens we collected here in 2017.
We traveled to the habitat in a spectacular fashion: in the back of a pickup truck usually used to transport cows:

The seats were loose, so it was a matter of holding on all the time:

Here the cow **** has flowed down on the outside (and it was the same on the inside!)

a long ride on endless llanos:

but we finally arrived here, which we found out is the home of A. sp. "D29", a beautiful fish:

Thanks for the nice report Tom!
The fish sold be Ruinemans are for sure descendants of the specimens collected by you/Ernst - there are still some people in the Netherlands keeping them.

And just to show a D29 female that I would not be able to tell apart from Schwarzkehl: Wow! Thank you for this information, Frank.
We probably can't rely solely on the human eye here. We need a mapping, analysis and comparison of the total genetic material here to see how much, if anything, separates these two forms.
R

thank you SO MUCH, both of you. this is fantastic.
fish from the macmaster complex is very much on my wishlist, so pictures and info like this great.

do you think a pair would do in a 75 liter?
also, what other fish did you find in these waters? -here i'm mostly thinking of candidates as dither fish.

rasmusW said:
do you think a pair would do in a 75 liter?
Click to expand...

That depends mostly on the tank's footprint, not the amount of liters. A 75cmx40cm footprint and 25cm height might work, but the bigger footprint the more interesting behavior might be observed.
Of course it also depends what kind of structures you'll put in there...


rasmusW said:
also, what other fish did you find in these waters? -here i'm mostly thinking of candidates as dither fish.
Click to expand...

In the river where we collected the A. sp. "D29", we did not see many other fishes. The only ones I spotted, was in a photo I took below the surface in the main river: 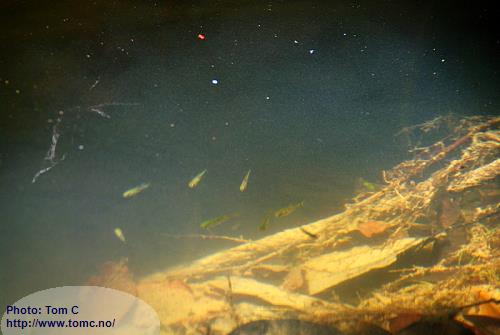 I have no idea what they are. Maybe a Tyttocharax sp. or something similar?

In all the habitats were we found A. sp. "Schwarzkehl", there were lots of Copella eigenmanni (= C. metae): 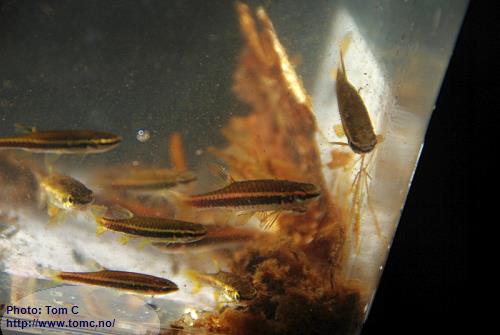 I think i’ll have to pass, though i desperately have the “get the apisto” itch…

With good scaping you could do either borelli or pucallpaensis; both of these are white water fishes if that matters. The pucallpaensis is really an attractive fish if that matters; also it is quasi pair forming with the male/female having not so much aggression once they breed.
R

anewbie said:
With good scaping you could do either borelli or pucallpaensis; both of these are white water fishes if that matters. The pucallpaensis is really an attractive fish if that matters; also it is quasi pair forming with the male/female having not so much aggression once they breed.
Click to expand...

Thanks!! I think i’ll save the money and wait till i can afford a larger tank and hopefully get some of the fish i really really want.

rasmusW said:
(-if there is such a thing)
Click to expand...


rasmusW said:
I think i’ll have to pass, though i desperately have the “get the apisto” itch…
Click to expand...

Having looked at their list... uuuhhh... some nice Apistos there.
How about the others? Had them all? Or nothing clicking?

MacZ said:
Having looked at their list... uuuhhh... some nice Apistos there.
How about the others? Had them all? Or nothing clicking?
Click to expand...

Haven’t had them all but right now there is only d29, that clicks a bit.

-r
You must log in or register to reply here.

Do you still have Apistogramma diplotaenia pairs available to sell? Please advise. Thanks.

Apistomaster anewbie Apistomaster wrote on anewbie's profile.
I see that The Wet Spot Tropical Fish currently has the fire red A. agassizi you are looking for. Here is the link:

www.wetspottropicalfish.com
I've always had good experiences buying from them on line.
Jul 27, 2022 •••

Hanzle
Hallo,
I am Hanzle from Holland and keep apistoos for 40 years. Had my own aquarium shop from 1984 till 1988. Always s great fan from apistoos and hyphessobrycon which is s great combination in a Community Aquarium. Perhaps.....in the near future I start breeding apistoos again. Have a 400 liters Community aquarium for hyphessobrycon wadai and apistogramma biteaniata.
Feb 7, 2022 •••
E
Eugene09
I want to get a 55 gallon slightly planted tank with many caves and I am thinking of getting 2 electric blue acaras, 3 blue rams, a apistogramma, 3 angelfish, and some corrydoras. Will that work if I keep the temperature at about and 80 or less?
Jan 3, 2022 •••
Top